As we prepare for Thanksgiving at The Gardens at West Maui, a charming vacation ownership property near the ocean in West Maui, we take this opportunity to tell you, ahead of the biggest eating day of the year in America, that select guest suites come with full kitchens and large ovens. So if you’re visiting us over the Thanksgiving holiday and would rather cook your own turkey than eat out, you’re in luck!

In the meantime, here are some interesting and surprising facts about America’s favorite sacrificial lamb, the turkey.

Turkeys can exhibit more than 20 distinct vocalizations, including the distinctive male gobble that can be heard a mile away.

Turkeys recognize other turkeys by their distinctive voices. No two sound alike.

Turkeys have their own internal GPS. They have the ability to learn precise details of even the largest habitat.

Wild turkeys (the bird, not the beverage) can reach the old driving speed limit of 55 miles per hour in flight.  Due to selective breeding (for obvious fattening reasons), domestic turkeys are ill-suited for lift-off and unable to fly.

Turkeys can run up to 25 miles per hour. Fast, but not fast enough to evade their dinner table fate.

Founding father Benjamin Franklin is said to have proposed to make wild turkeys the symbolic American bird instead of the bald eagle. Who knows? If he had gotten his way we may have all been eating bald eagles for Thanksgiving.

Male turkeys will attack their reflection in mirrors or windows.

The red dangly appendage under a turkey’s chin is called a wattle. The red flappy thing atop the beak is called the snood, which can change color with the bird’s mood.

Turkey meat in and of itself does not make you sleepy. More likely your post-dinner lethargy is caused by the over-consumption of carbs and alcohol.

Turkeys have two stomachs and no teeth. How did they evolve to have an extra tummy? Lacking the chompers to break down food, turkeys developed an extra stomach to aid in digestion.

There is an organization called the National Turkey Foundation. No one knows what it does precisely, but apparently one of its missions is extracting pertinent turkey data that can be shared with journalists looking for pertinent turkey data. Like this: According to official National Turkey Foundation research, the vast majority of people (88 percent) eat turkey on Thanksgiving.

If you’re staying at The Gardens at West Maui on Maui over Thanksgiving and planning to cook your own bird, we are pleased to share the following tips for a juicy and flavorful turkey from renowned celebrity chef Jason Diaz.

Brine the turkey at least 24 hours in a mixture of salt and sugar (equal parts), lemons, oranges and herb sachet (I like to use sage, thyme and whole peppercorns).

Rub compound butter made with unsalted butter, garlic and herbs under the skin of the bird and on the skin prior to roasting to infuse flavor and also help to keep the bird moist.

Baste the turkey during the roasting process to help ensure that the bird stays juicy.

One thing most people tend to do is overcook turkey, leaving it dry. Poultry should be cooked to an internal temperature of 165 degrees. I personally like to pull it out of the oven at around 160 degrees and allow it to rest. The carryover cooking process should take it to 165 degrees.

And happy Thanksgiving to all! 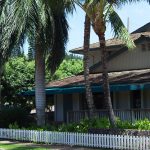